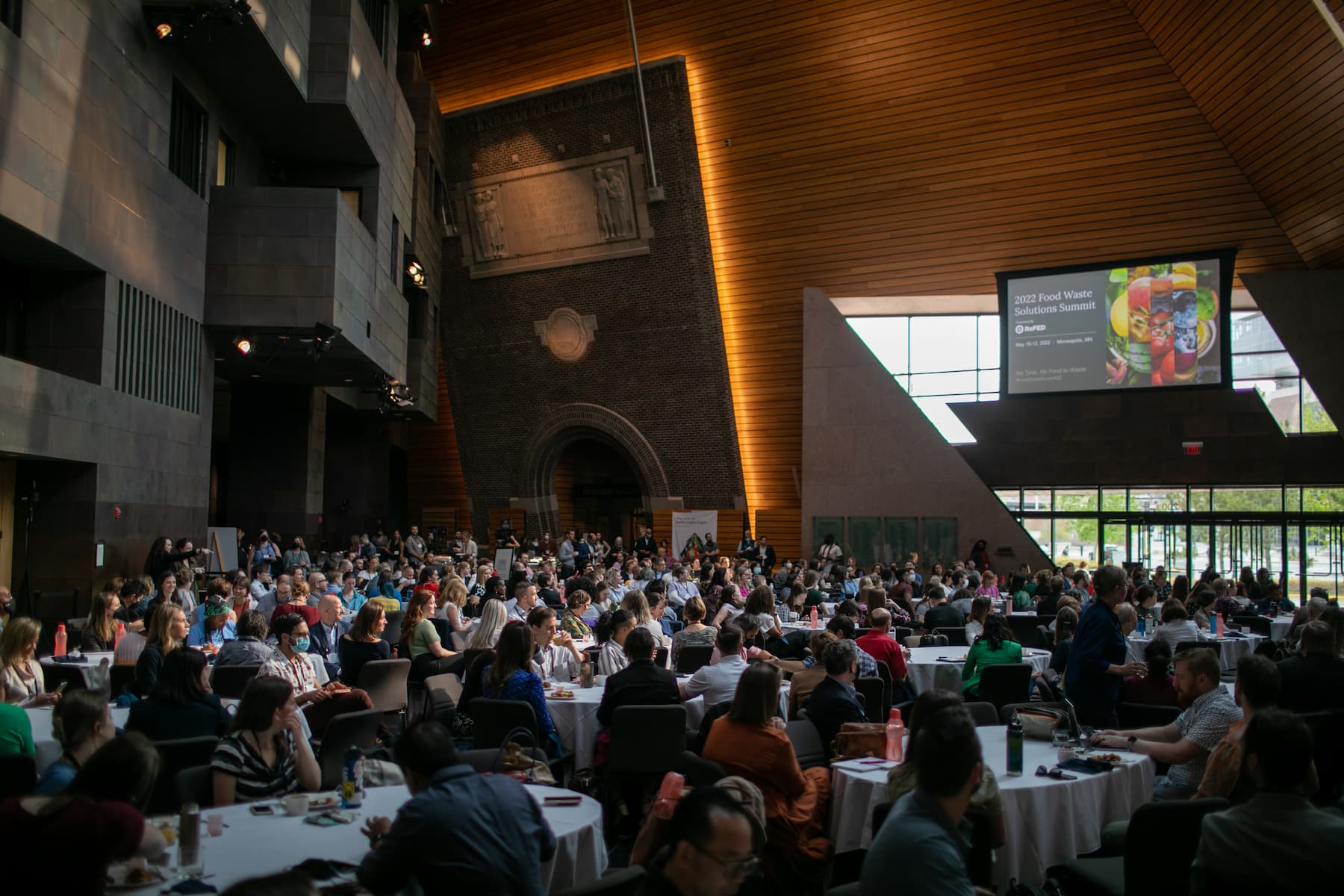 Presented by ReFED, the first Food Waste Solutions Summit in more than two years took place May 10-12 in Minneapolis, with more than 640 people joining either in-person or virtually. This was the largest gathering of the ReFED community to date, and while the last two years have been far from slow, the event was a good reminder of the real purpose of meeting people face-to-face – community building, inspiration, acceleration, and celebration.

The connection at the conference was felt in full, but in the midst of this camaraderie, serious work was getting done, and a few themes emerged throughout the course of the event – the importance of recognizing widespread efforts already underway from an expanding number of organizations across the food system; the true power of engaged stakeholders; and the uncompromisable need for a truly diverse, equitable, inclusive, and just circular food movement.

The growth of food waste solutions over the last ten years has been significant, and whether through private, philanthropic, or public investment, continued growth will depend on widespread awareness of opportunities. To help capital providers and solution providers develop funding strategies, understand funding trends, and dig into granular details on specific food waste deals, ReFED used the Summit to announce the launch of a new resource in the Insights Engine – the Food Waste Capital Tracker. Data from the Capital Tracker shows that nearly $8 billion has been invested in food waste solutions in the last ten years, including a record $2 billion in 2021 alone. But there is still a large gap to fill to reach the estimated $14 billion needed annually to cut food waste in half. (To learn more about the Capital Tracker and overall food waste funding trends, register for the official launch webinar on June 1.)

Food waste investment can result in a range of impacts, and as ReFED Executive Director Dana Gunders reminded attendees during the Summit’s opening session, reducing food waste is not just good for business, it is also a top climate solution. To drive home that point, Dana also announced the host companies participating in the first-ever Environmental Defense Fund/ReFED Climate CorpsTM Food Waste Fellowship program. They include Albertson’s, Amy’s Kitchen, Aramark, CAVA, Conagra Brands, J.M. Smucker, Sodexo, and United Natural Foods; plus the New York City Housing Authority and Lane County (OR) in the public sector. This is just one way in which businesses are teaming up with NGOs to take action against food waste.

The Power Of Community

In a special session co-hosted by Food Tank, Chef Andrew Zimmern reminded the audience of the power of community and encouraged them to call on others who were in attendance when they are in need of encouragement, ideas, or simply someone else who gets it.

The food waste community is being built on every level – the local scale, the national scale, and the global scale. It is being built through non-profit and food rescue organizations, tech companies, corporations, and individuals, and all of these interconnecting nodes and webs are catalyzed when they are working together and leaning on each other.

In order to ensure the power of community continues to make a real impact, ReFED has been growing two official networks, both of which had a presence at the event. The Food Waste Action Network supports individuals and organizations looking to have access to special resources and networking opportunities, and The Food Waste Funder Circle, presented by ReFED in collaboration with Upcycled Food Association, offers funders opportunities for education, collaboration, and investment in the sector.

Also part of this community are the Summit’s sponsors, who joined the event to strengthen relationships and further collaboration. When some of the most influential companies in the food system – like General Mills, Kroger, Hellmann’s, Google, Trane Technologies/Thermo King, Compass Group, and Target – are in the same room with innovative solution providers like Afresh, Do Good Chicken, DoorDash, Spoiler Alert, Shelf Engine, NorthStar Recycling, and TechSoup, mixed with impactful philanthropists like The Posner Foundation, The Tepper Foundation, Seeding The Future, and The Betsy and Jesse Fink Family Foundation, and media partners like The Spoon Tech, Food Tank, and GreenBiz, the potential for impact is boundless.

ReFED has always operated with the philosophy that reducing food waste is a “big tent” – there is a role for everyone, and it will require a wide and diverse set of community members working together across the roadmap – and ReFED’s role as a connector and catalyzer is only as strong as the current passing through the conduits. It was exciting to see so many stakeholders from across the food system plugged into the energy at the Summit.

Food Waste Action must be Diverse, Inclusive, Equitable and Focused on Justice

For the movement to reduce food waste to be successful, systemic inequalities and injustices need to be addressed head-on. The Summit focused on these issues in several ways. First, there was a powerful art installation that questioned if everyone really has the same 24 hours in a day to engage with the food system – or does a lack of transportation, limited purchasing options, and more necessitate some groups spending more time each day to get nutritious and culturally appropriate food. Environmental justice, treatment of workers, food access, and wealth disparities were all discussed at the Summit, and an effort was made to amplify voices that have not traditionally had a megaphone. The Summit offered four sessions with a specific diversity inclusion, equity and justice (DEIJ), focus, including two interactive “fish bowl” exercises where participants could share their experiences with inequality in the food system while their thoughts were live-illustrated on a projected screen. 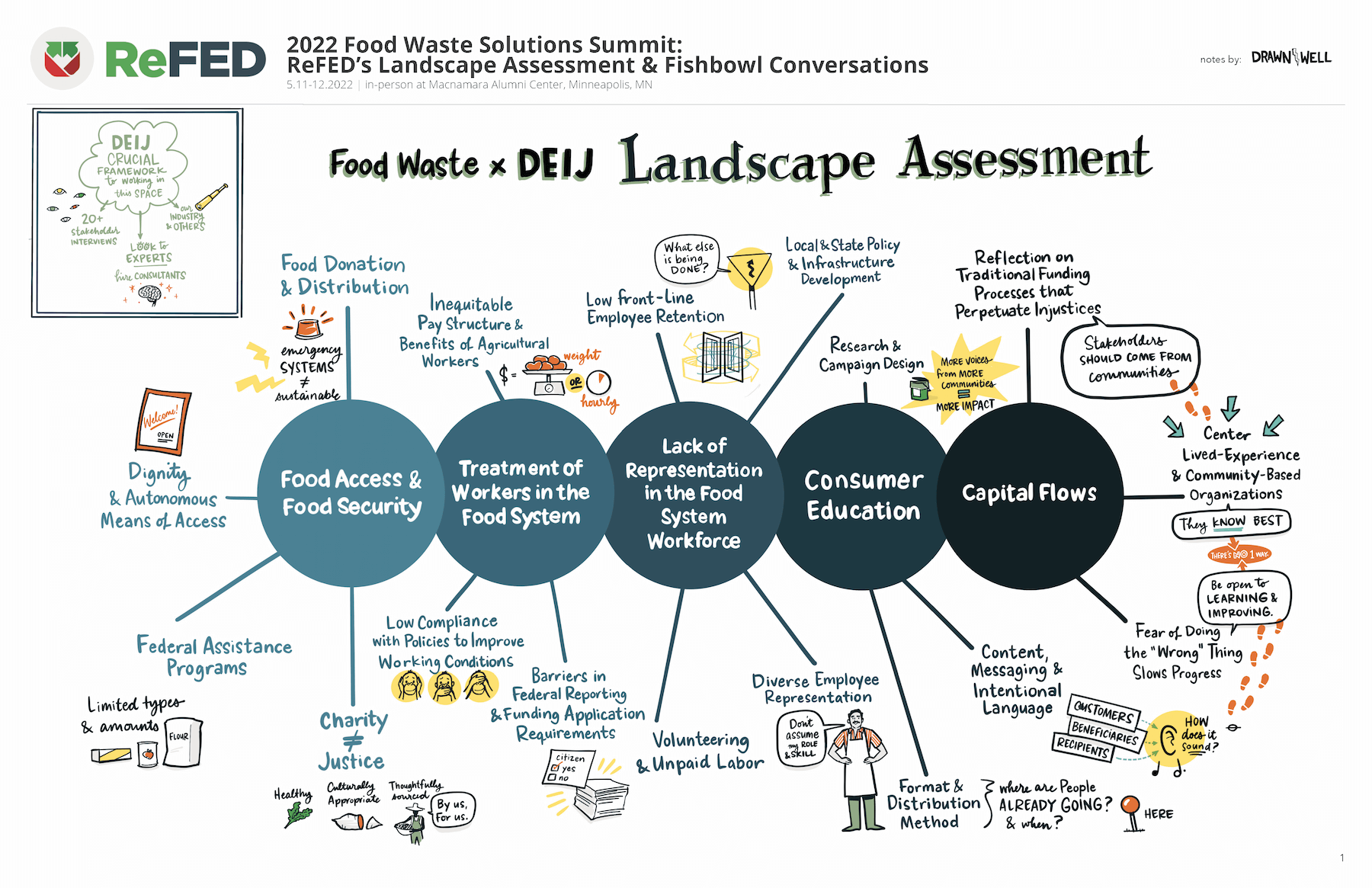 Two film screenings also highlighted DEIJ issues throughout the food system. Gather explored the impact of food sovereignty (or lack thereof) for native people. Attendees also saw a short film about the work of The Nogales Produce Rescue program, which served as an inspiring reminder about the people who work to produce our food, as well as those who are making sure that as little as possible goes to waste.

Special thanks to A-dae Romero-Briones of First Nations Development Institute, who led an inspiring talk on the mainstage with Yuka Nagashima of Food Shift, Rodrigo Cala of Latino Economic Development Center, and Sophia Lenarz-Coy of The Food Group Of Minnesota. Their message was clear – DEIJ issues must be addressed head-on, and while it is okay to make mistakes when trying to do this work, it is no longer okay to do nothing – no matter your role in the food industry.

The Time Is Now

A consistent reminder from speakers at the Summit was that there truly is no time to waste.  Food waste is a top climate solution, with additional impacts that extend to people and the economy, and it is past the time to act. Summit speakers also emphasized that food is much more than that, too. With current events in Ukraine, it is as important as ever to value our food, and make sure that as much as possible is going to its highest use of feeding people. Every voice needs to be included if the challenge is going to be met. As Dana expressed to attendees during her closing remarks: now is the time to be bold and courageous in your work for the next year – and beyond.