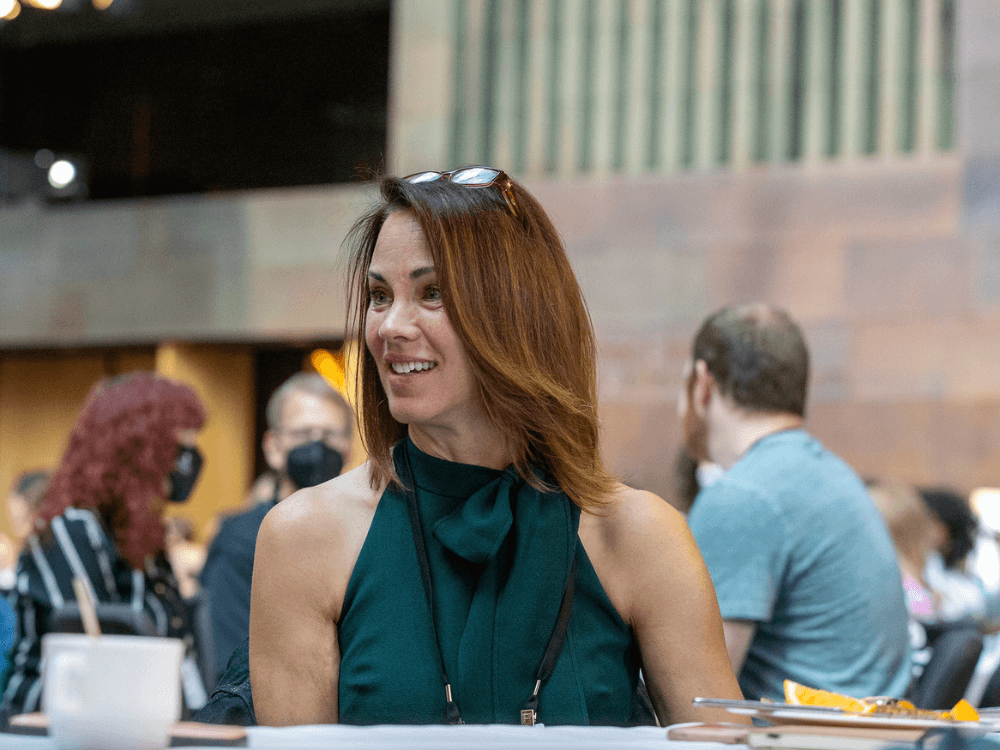 Do you remember your school cafeteria? If it was anything like ours, it was utter pandemonium. Among the chaos, there were likely several large trash cans with discarded veggies, half-eaten sandwiches, splattered milk, and a plethora of food waste. It turns out, this scene sparked a movement that has since exploded and continues to grow. All it took was someone to notice and care – and a conversation at the ReFED Food Waste Solutions Summit.

Elaine Fiore is an environmental educator for Florida’s Broward County School District, the sixth largest in the nation. A few years ago, a teacher noticed the lunchroom trash cans and came to her concerned about an all too common problem in schools: huge amounts of food were being wasted in the cafeteria.

Fiore jumped into action right away, seizing the opportunity to engage students in an audit of the school’s waste. Rolling up their sleeves, the students found first-hand that more than 300 perfectly good, unopened food items per day were going in the trash in just their school alone. Extrapolated to the district level, this meant that approximately 11 million unopened items were being wasted each year. She knew something had to be done.

Fiore began presenting at conferences across the state, educating about the issue and looking for solutions. Throughout that tour, she uncovered more about the causes and impacts of the waste, like the fact that many schools were misguided about applicable regulations and had been operating under the assumption that they were legally prohibited from donating excess food. She also met and connected with a range of people in different roles who were interested in helping to change the status quo around food waste.

In  2019, there was a turning point when Fiore attended the ReFED Food Waste Solutions Summit in San Francisco. Dr. Elizabeth Baca of Deloitte, one of the conference speakers, connected Fiore with Tracey Delaney of the Public Health Alliance of Southern California and the driving force behind California Food Waste Prevention Week (CFWPW) with the support of Baca, to discuss school food recovery. Once Fiore learned about Delaney’s work in coordinating CFWPW, she was intrigued by the idea and knew Florida needed to host its own Food Waste Prevention Week (FWPW). Like many working in the food waste community, Delaney and team were an open book and a great resource. She enthusiastically shared the whole playbook for FWPW with Fiore and the Florida team (Florida Department of Environmental Protection, Florida Department of Agriculture, Sustainable Events Network, Recycle Florida Today, FAU, UM, FIU), and offered support and encouragement throughout the planning process.

“Our Florida team came together as a result of observing so many talented people and organizations working in silos to solve the same problem of food waste. Food Waste Prevention Week creates a space for our community to come together, share best practices, and learn from each other,” said Fiore.

In 2022, Fiore connected with Ashley Cabrera and Matt Taylor from the Tennessee Department of Environment and Conservation, who were keen to collaborate. In the months that followed, other states and cities across the country wanted to be involved. So “Florida” was dropped from the event title, as “Food Waste Prevention Week” expanded beyond the state.

In 2023, Food Waste Prevention Week will be a national campaign, with leaders from across the country involved in planning the event. In just two short years, Fiore has leveraged her passion – and the growing food waste community – to start a movement at the local level and take it to a much larger scale.

“This event is a testament to the spirit of community and collaboration. There is something magical that happens when people share their ideas and make time to help each other. Ideas have power and take on a life of their own.  Example after example, I am privileged to have encountered and worked with special people who selflessly share their time, talents, and energy for the greater good,” said Fiore.

About a month after the 2022 FWPW, Fiore received a scholarship to attend the 2022 ReFED Food Waste Solutions Summit. Again a few major connections were made, and ideas sparked. First, she attended the food waste trivia event and was excited about the potential for events like that to engage and educate people at the same time. Heidi Rupke of Clean Memphis, who coordinated a Bread to Tap event for Food Waste Prevention Week, was also at the Summit. Rupke and Fiore met with ReFED’s Sam Buck and decided a bank of food waste trivia questions would be a worthwhile resource to share with the field, so they are developing a bank of questions as a resource on their partner portal.

Next, in a session on engaging consumers in the food waste movement, Fiore heard Ohio State Professor and ReFED Advisory Council member Brian Roe speaking about Belinda Li Simon Fraser’s gamification research and the creation of a game to encourage people to reduce food waste. Fiore recognized the power in that right away, and Simon Fraser is now part of the planning committee for 2023, where gamification strategies will be used. Lastly, she connected with Elanie Blatt, a Senior Policy and Program Analyst at the Oregon Department of Environmental Quality. They spoke about the state’s “Bad Apple” campaign that uses humor to engage more people on the issue. After learning about the results of that campaign, Fiore worked with Blatt to share Oregon's campaign materials to be integrated into the 2022 FWPW social media campaign. Additionally, Blatt is co-chairing the national team with Fiore for 2023.

“I’m extremely grateful to be a part of this community, with so many brilliant and creative minds focused on solutions,” said Fiore. “Food Waste Prevention Week is such a great opportunity to get the word out about food waste. From the social media campaign, student engagement, webinars, in-person, and community service events, there is something for everyone.”