Written by: Riyana Razalee, Head of Business Development at Re-Nuble

Geopolitics and Its Effect on Food Systems

Current events continue to prove that geopolitical instabilities, such as wars, have a domino effect on global outcomes. In particular, food systems are one of the first victims. This is because food has always been a weapon of war. History has shown us that it’s a tried and tested wartime method: cut off food supply and improve chances of success. But food supply is deeply intertwined with other parts of the food chain.

A Case Study: The Russia-Ukraine War

The war is disrupting food supply all across the world, but it’s also threatening another part of the food supply chain – the fertilizer industry.

One of Russia’s geostrategic advantages is its energy production from fossil fuel reserves. This energy is also the source of creation of synthetic fertilizers, which are manufactured from minerals, airborne gasses and inorganic waste materials. For this reason, Russia has become one of the major global exporters of several critical fertilizing compounds such as urea and potash. These synthetic mineral salts are used vastly across the world as a means for food production. But the Russia-Ukraine war has significantly reduced global access to them, which means less fertilizer, and therefore less food, will be available to people around the world. A number of sanctions have already been imposed. Russia  stopped shipment of potash to many countries in the lead up to the war. In retaliation, Western countries halted shipments of ammonium nitrate to Russia, stretching the domino effect of lower fertilizer production across borders.  As the conflict intensified, many countries formalized these restrictions in the form of further global sanctions on Russia.

Experts are already warning us that a global food crisis is looming due to skyrocketing synthetic fertilizer prices. In mid March, Green Markets North America Fertilizer Price Index reported a 10% jump in synthetic fertilizer prices in merely one week. Compared to a month ago, prices have gone up by approximately 40%. Outside of the US, we have examples such as Brazil, the world’s largest soybean producer, which sources almost 50% of its potash fertilizer from Russia and Belarus. The country is now down to just three months-worth of stockpiles. It’s not just crops which are being affected, but also the livestock industry. The lack of synthetic fertilizers leads to a lack of wheat which many farms use to feed their livestock. Countries that are already afflicted by food insecurity are now at risk of worsening food shortages.

The U.S. and Its Exposure To Synthetic Fertilizer Instability

The U.S. doesn’t import much of its synthetic fertilizer from Russia. Nevertheless, as the world’s third-largest fertilizer importer, America is still dependent on other countries, as depicted in the image below: 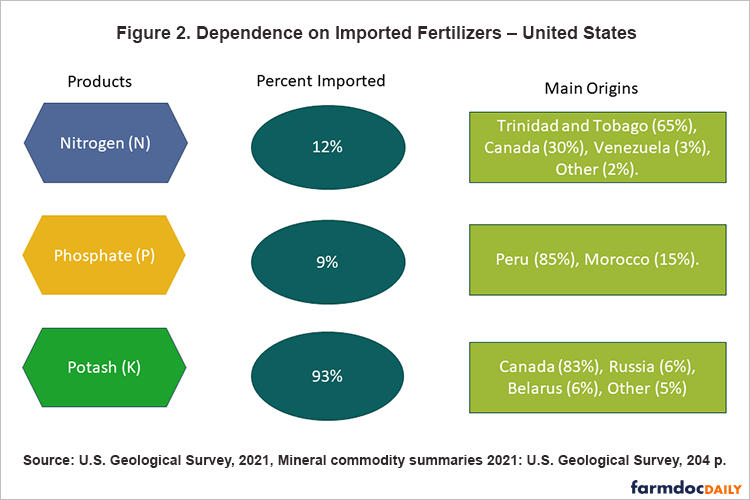 As synthetic fertilizer supplies are strained, other countries are now frantically sourcing it from other countries – some of which are the countries which supply to the U.S. One way to assess if the US is exposed to food production instability as a result of erratic fertilizer prices is to see how it has fared historically.

According to the US Department of Agriculture, the country faced record high  synthetic fertilizer prices in 2007, trailed by a significant drop the following year. This fluctuation, as shown in the graph below, was a result of low synthetic fertilizer inventories due to the planting of an additional 15 million acres of corn and over 3 million acres of wheat. Consequently, nitrogen, phosphate and potash prices increased by 32%, 93%, and 100% respectively. Raw input material prices also affected the surge in synthetic fertilizer prices. For example, Moroccan phosphate rock contract prices increased by three times. Concurrently, international contract prices of sulphur skyrocketed by over 170%.

More recently, synthetic fertilizer imports have been affected by the likes of internal factors such as Hurricane Ida which halted processing plants’ operations, as well as external situations such as China’s urea export decrease. In summary, the US’s food production is far from protected from geopolitical instability.

While there are certainly benefits to the trade of synthetic fertilizer, it is clear that we must look to more stable sources of supply.. The ongoing Russian invasion of Ukraine is a timely example of the fragility of the global food system. But there is an unexpected triad that’s emerging out of this: geopolitics, fertilizers, and… food waste.

The idea of going closed-loop isn’t new. Where it applies here is its ability to act as a free resource to relieve entire countries off their dependence on synthetic fertilizers imported from across oceans. Past considerations for using vegetative food waste as a fertilizer source for indoor growers were affected by many barriers. These included logistics, transportation, and application methods, which meant that there was no traditional infrastructure in place to recapture minerals and repurpose them for food growth in a more circular system. The science for developing accurate, measurable mineral inputs for soilless farms varied wildly, a problem no indoor farm could risk. As for processing nutrients, most indoor farms were limited on space and equipment available to extract the desired minerals. It was not feasible from an investment perspective, and it was outside of their expertise, requiring excess space and access to waste streams.  But these barriers are now gone and food waste is still very much abundant in the U.S.

Today, technology already exists to transform food waste into a water-soluble and sterile organic hydroponic nutrient, allowing food producers to grow food at a rate comparable to synthetic fertilizers. Particularly for indoor growers, the results of using food waste as a resource include not just cost competitiveness to the synthetic fertilizers that dominate the market, but also the elimination of landfill waste and greenhouse gases.

We need to move away from the idea that a food supply chain is linear and instead approach it from a closed-loop perspective. One that can perpetually and ethically reclaim food-safe nutrients from verified and sterile food production sources. Meaning that, by the time the food gets to the consumer, we now fully understand how to recover useful resources from the food that is disposed of, or any of its by-products from regional food value chains.

The use of food waste continues to emerge as a critical path to controlling and managing supply and cost risks. Ultimately, using it would activate a direct and sustainable sourcing mechanism of minerals and nutrients that perform at or better than current synthetic fertilizers. The final piece of the puzzle is a shift in mindset, which would facilitate global agricultural communities safely reusing localized food waste.

Riyana Razalee is the Head of Business Development at Re-Nuble. Learn more at re-nuble.com or contact Riyana: riyana@re-nuble.com

Stay Up To Date On All Things Food Waste

ReFED's mailing list is a great way to stay up to date on the climate science around food waste, as well as track our work in the space. We also regularly share resources and announcements for a range of stakeholder audiences.

The Latest Food Waste News Straight to your Mailbox